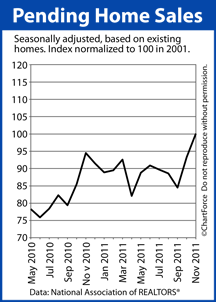 The Pending Home Sales Index is published monthly by the National Association of REALTORS®. It measures homes under contract nationwide, but not yet “sold”.

In this way, the Pending Home Sales Index is different from other housing market indicators. It’s a “forward-looking” figure; a predictor of future home sales. According to the National Association of REALTORS®, more than 80% of homes under contract close within 60 days.

On a regional basis, each part of the country showed an increase in homes under contract.

However, here in Morgan Hill, we must discount the value of even the regional data, somewhat. Like else in real estate, the volume of homes going under contract vary by locality.

Throughout the West Region, for example, the region in which pending home sales increased the most from October, there are nearly a dozen states. Undoubtedly, some of those states performed better than others in terms of “homes under contract”, but we don’t have an indication of which states those were.

In addition, within each state, every city, town, and neighborhood realized its own unique market in November, and produced its own sales statistics.

For buyers and sellers throughout California and the country, therefore, it’s more important to watch data on a local level than on a national one. Reports like the Pending Home Sales Index are helpful in showing national trends, but as an individual, what you need are local trends.

For local real estate data, be sure to ask your agent.