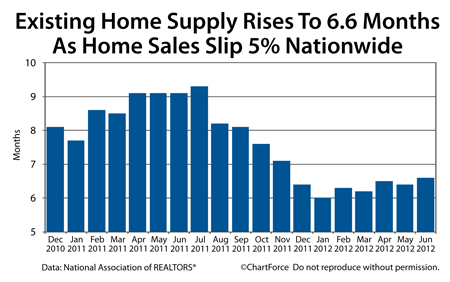 According to the National Association of REALTORS®, Existing Home Sales fell to 4.37 million units in June 2012 on a seasonally-adjusted, annualized basis. This is 250,000 fewer home sales per year as compared May’s figures which NAR has revised 2 percentage points higher.

The pace at which homes are selling has slowed, too. As compared to May, the Existing Home Supply rose 0.2 months. At the current pace of sales nationwide, the national home supply would now be exhausted in 6.6 months.

A home supply of 6.0 months is believed to mark a market in balance. There are currently 2.39 million homes for sale nationwide — the lowest total in 3 months and more than 24% below than the listed inventory at this point last year.

Other noteworthy statistics from the Existing Home Sales report include :

In addition, distressed sales as a percentage of all sales was unchanged in June as foreclosures sold for an average discount of 18 percent below market value. Short sales nationwide sold at an average 15 percent discount.

More on “distressed sales” : In June, distressed homes accounted for 25% of all home resales, the smallest percentage of homes sold with such status since the real estate trade group began tracking the data in 2008.

Despite falling home sales and rising home supplies, however, home resales are expected to return to growth in July. Last month’s Pending Home Sales Index spiked to a 2-year high, and 80% of homes under contract close within 60 days. This portends well for July’s Existing Home Sales data, due in 4 weeks.

Low mortgage rates and rising rents in Morgan Hill and in many U.S. cities continue to fuel the U.S. housing market. Home buyers should expect higher home prices ahead.